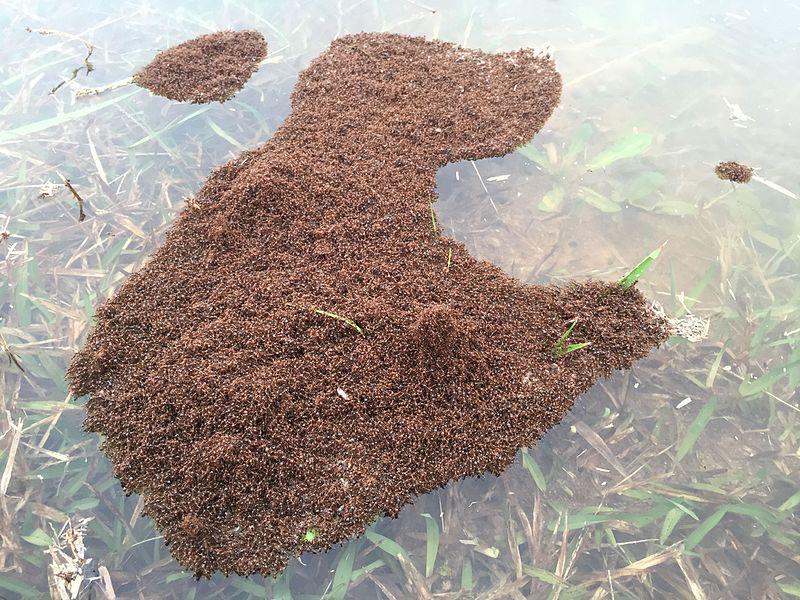 Fire ants, which carry a dangerous sting, are survival experts that can adapt to most conditions and environments. Fire ants make their homes underground that consist of hundreds of passageways and chambers. During heavy rainfall or flooding, their homes are filled with water and the fire ants are forced to evacuate.

After a good rain, have you ever noticed a brown patch floating in the flooded areas? Those are actually fire ants! The ants band together to create rafts that float upon the water until they can reach ground again. The rafts carry all members of a colony including eggs, larvae, queens, winged ants, and works.

Fire ants evolved in the Amazon River floodplains, so they were used to being pushed out their homes during the rainy season. Because of this, the fire ants have come up with a flood drill and it involves sticking together. One fire ant cannot survive on its own, they need each other and a queen to produce offspring for the community.

When the ant’s mounds flood, they escape to the surface and join arms with adjacent ants to float. Their ability to float comes from the “waterproof” wax on the ant’s body. The fire ants actually enjoy the floods, because this is how they get around to new areas.

These rafts can pose a serious threat to anyone that encounters them though. Once the floating fire ants come in contact with your skin, they immediately begin biting and stinging. These fire ants have become more aggressive due to the flood, so they have about 165% more venom than normal fire ants and can cause serious harm.

If you do ever come across one of these floating ant rafts, it is recommended to stay as far away as possible. If you are looking to destroy these rafts in order to prevent them from moving in close to your home, call your local pest control company to eliminate the problem.